We have a new addition to the Study Abroad Lithuania office! I’d like to introduce you to Franklin Brown, who will be recruiting for us starting in January. He’s a Fall 2012 SA LT alumni and a recent graduate from Gordon College. Franklin has a degree in Linguistics, a minor in German, and a history for living in random places around the world. Since our theme this semester is being a Global Citizenship, we’re having Franklin share about his experiences.

I have always been fascinated by culture, whether it was distant and foreign or simply the oddities of my own. In part, this led me to study Linguistics because of the ties and correlations between language and culture. And this deep interest has brought about some incredible opportunities.

I studied abroad at LCC during my junior year of college. Because I had experienced Eastern European culture for the first four years of my life in Prague, and only then, I wanted to take advantage of the chance before me to experience it again. My semester at LCC was life-changing. The cliché responses are true: I learned about Lithuanian culture, but I learned so much more about myself. And in going back to America, it was another cross-cultural experience, though not on as deep of a level. Two semesters in a row of growing and changing was a little rough. As much as I like to pride myself in my cultural insights, I have to admit that coming back was a very difficult process for me. 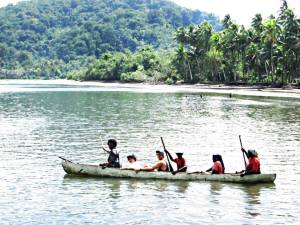 nd then I decided to go abroad again the next summer. Was it the wisest decision? Perhaps not, but it was another unforgettable time. As part of an honors program at Gordon, the Elijah Project, I had an internship in the Solomon Islands working with missionaries who are translating the Bible into the local language, Ɂareɂare. I did not work intimately with the translation process, which lies generally outside my area of interest. Instead, I worked on word documentation and lexicography—that is, dictionary-making. I worked with locals to collect words in their language, confirm them with others, and make a list of 700-800 Ɂareɂare-English translations. The problem with Bible translation there, besides the general difficulties, is that the language is still unwritten. Problems unimaginable to major-language-speakers abound: what letters are in the alphabet? What sounds do certain letters make? What do we call letters that aren’t in other alphabets? This is what I came to assist with. Children, and even some adults, aren’t fluent in any language—Ɂareɂare, Pijin (the trade language), or English—and even if Ɂareɂare were written down, they couldn’t read it. I worked more with literacy than missions so that people could learn to read at least their own language and eventually the Bible.

Sometimes I would sit and think about the cultures I had experienced in one year. It would bring me to laughter to think of my Solomons friend, Ezra, trying to live in Lithuania, or my Lithuanian friends trying to navigate Solomon Islands culture. I like to think of American culture as somewhere in between the two. But now, looking back on it, I have to imagine myself in both cultures and how much I changed going from to another—also, more importantly, which parts remained the same?

What stays the same shows who I am.

So now I’m back at LCC. A number of people I’ve seen so far have asked me, with a bewildered tone, “Why did you come back?”…cause who would want to go back to Lithuania, right?

No. I like it here. I loved the changes and growth that happened to me here last time. I love working with college students. I like to travel. The super cold weather is exciting, and the rumors of the sun setting at midnight in the summer are thrilling. I’ve only been here for 2 weeks, so I haven’t quite figured out life-in-Lithuania yet. But I’m happy to be back.